EDIT: Alas, it was too good to be true. I have confirmed that the real winner of the auction for Demko’s Pride Night jersey paid a little less than $3000 for the jersey. The bid of $272,500 was either in error or a fake bid where the bidder never intended to pay. Still, Demko’s jersey ended up being the highest bid of the auction.

You could buy a pretty nice home for $272,500. Not in Vancouver, obviously, but there are lots of cities where that much cash could set you up very comfortably.

Or, you could buy one “game worn” jersey.

The Vancouver Canucks wore unique Pride Night jerseys for their warm-up ahead of their game against the Washington Capitals on March 11. After the game, the jerseys worn by each of the players were auctioned off on Vanbase — a total of 22 jerseys, including the game’s scratches, Madison Bowey and Sheldon Rempal.

There are plenty of reasons why these jerseys would fetch a high price. They are beautifully designed by 20-year-old Swedish artist Mio, turning the Canucks’ orca logo into a meaningful story of the queer journey. They’re limited in number, making them highly-desired collector’s items. And they were actually worn by Canucks players, giving them a direct connection for fans.

But then there’s Thatcher Demko. 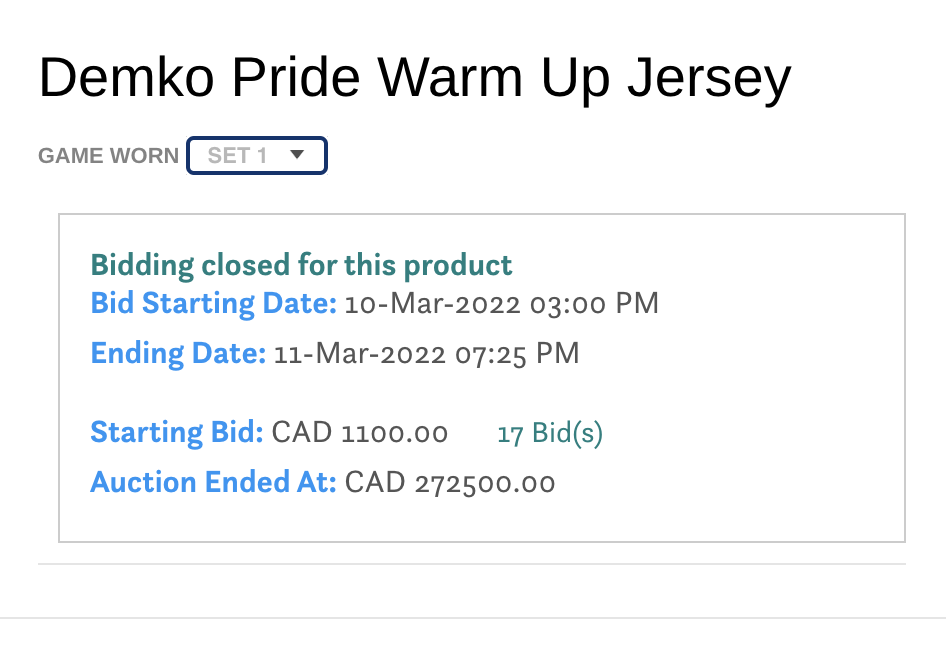 That is a mind-blowing number. In fact, if it goes through, it would make it one of the most expensive hockey jerseys ever sold at auction.

The most expensive jersey ever sold at auction was a game worn Paul Henderson jersey from the 1972 Summit Series. Henderson famously scored the series-winning goal in the final game of the series with just 34 seconds remaining and the jersey he was wearing when he scored that goal was auctioned off for $1.275 million in 2010.

Near as I can tell, Demko’s $272,500 Pride Night jersey would be the second-highest price ever paid at auction for a hockey jersey. The next most expensive, according to a 2015 article, is a jersey worn by Bobby Orr during his rookie season with the Boston Bruins, which sold for $168,000 in 2010.

Perhaps it sold for so much because goaltender jerseys are so much bigger than skater jerseys. You have to pay for that extra fabric.

Demko’s jersey isn’t the only one that apparently sold for a staggeringly high price. Travis Hamonic’s Pride Night jersey also came in at a shocking sum: $100,000. 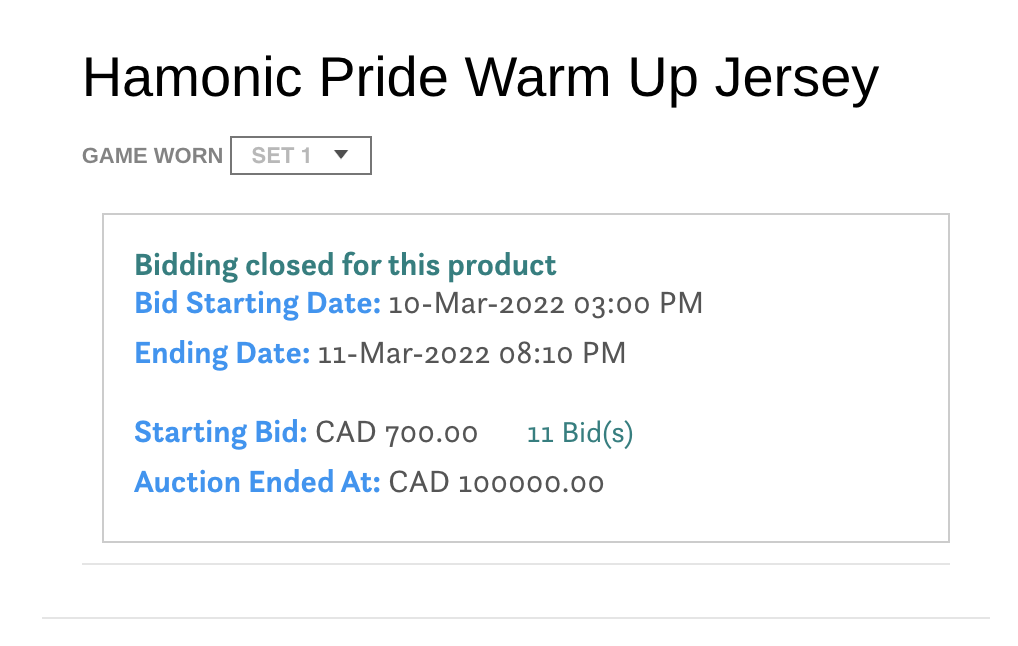 Is it exceedingly odd that Hamonic’s jersey sold for such a high price, rather than a star like Hughes, Pettersson, Horvat, or Miller? Yes, it is. But apparently someone really, really likes both Hamonic and Pride.

That might make Hamonic’s jersey the fifth most expensive jersey of all time. That same 2015 article had another Bobby Orr jersey — one signed by Orr that he wore in his final season for the Bruins — ranked behind Henderson’s jersey and Orr’s rookie jersey. It sold at auction for $115,000 in 2008.

There’s just one question that remains: did someone miss a decimal point?

It’s entirely possible that the bid for Demko’s jersey was meant to be the much more reasonable amount of $2725.00, with a decimal point separating those last two zeroes from the rest of the price. That would still make it the most expensive jersey of the auction but not more expensive than Bobby Orr’s game worn rookie jersey.

Likewise, the bid for Hamonic’s jersey might have been intended to be $1000.00, which makes a lot more sense.

Then again, maybe a couple of people really had money to burn and just loved the jersey design that much.

Partial proceeds from the jersey auction went to the You Can Play Project, which may have gotten a pretty hefty donation as a result of the astronomical prices bid on Demko’s and Hamonic’s jerseys.