The stage is prepared: a dusty old tome in the middle, a silver dagger encrusted with rubies across the open pages marking a specific section in the ancient text, a goblet in front of the book filled with the blood of thirteen poor souls, and five candles arranged in a pentagon around the periphery of the white marble pedestal. The whole room is gloomy and the air is thick with incense. There is absolute silence as you focus your mind on the difficult ritual you’re about to perform. The stakes are high, but if you succeed you will be able to summon a greater demon, who will bestow you the nine favor [sic] you need to become The Chosen, the highest-ranking cultist in your circle. The Blessed Dark by Nathan Meunier drags you away, kicking and screaming, into a world of deck building, rolling dice and casting spells. 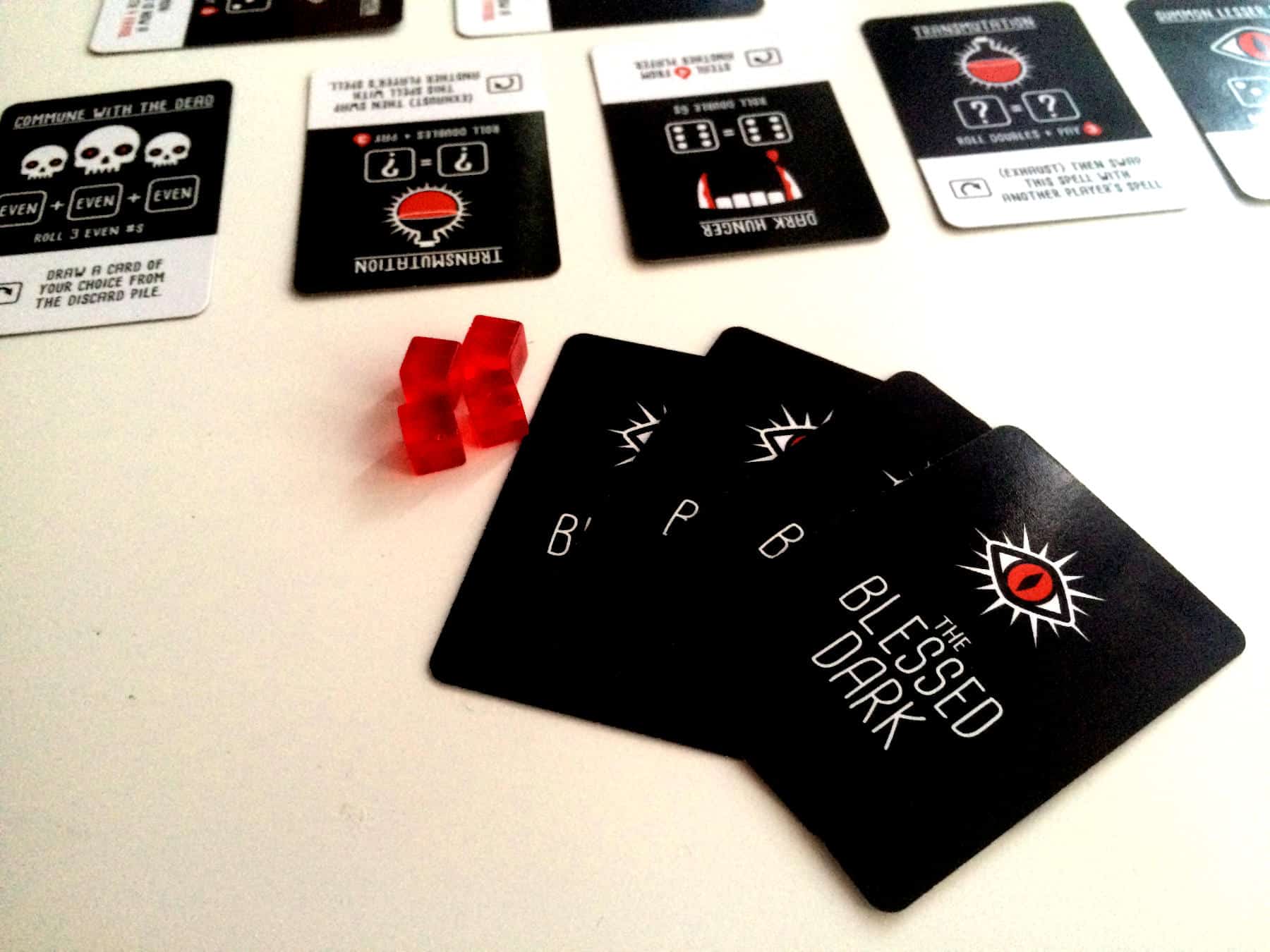 Let me start by saying that the theme of this game may sound gruesome, in reality the game isn’t graphic at all. The illustrations are quite abstract and certainly not photorealistic. So even though you will see skulls and blood on the cards, they are depicted more in icon form than anything else. The text on the cards just describes the effects they have, and even though the cards’ titles include terms such as “sacrifice” or “commune with the dead”, I consider this game suitable for younger players – but of course it is up to you to decide if the game is suitable for your children or not.

The Blessed Dark is a mint tin game, so great to have with you and play in the pub or when out and about. The footprint you need during the gameplay is pretty small. Every player needs room for the grimoire, the spell cards that you play out in front of you, a handful of blood cubes, which you need to complete some spells, and then you need room for a deck of cards and the central pool of blood cubes, plus room to roll three small dice. It definitely isn’t much space.

When people hear dice rolling, many often have an immediate negative response. However, in The Blessed Dark you roll dice to allocate to your spell cards, and the more spell cards you have in play, the better chance you have of completing one. You also can roll each die up to three times, and use your blood cubes to change the pip value of your dice results up or down. So even though there is luck in the game, it is definitely something you can mitigate.

The game plays very quickly, because on your turn you can do only one action – and most of the time you really only have two or three options, so there is very little risk of a player being drawn into analysis paralysis. That really only sets when you have your array of spells in front of you and start your ritual, that is when you roll your dice and have to decide what spell to allocate them to and which dice to re-roll. Every spell card requires certain dice combinations, very much like Yahtzee, and you probably know the feeling when you have to decide between going for a straight or a three of a kind.

There is definitely an element of push-your-luck, because it’s often tempting to re-roll a die that’s close to the result you need, in the hope that the next result is a perfect match, only to find that the roll ended up with a number even further away from the target. You can always use your blood cubes to adjust the pips up or down, but the more cubes you spend to get to the desired result, the less you have to cast this, or subsequent spells.

There is also tension in the game, because the pool of blood cubes is limited. So there is an element of trying to get all the blood for yourself, depriving other players of casting at least some of their spells, but there are spells to allow other players to steal blood from you. In fact, there is a constant ebb and flow of cubes in the shared blood pool.

Ultimately you want to cast spells that summon demons, which is where you get most of the points from. Lesser demons offer maybe three or four favor points, while greater demons could give you nine or ten. Yet, there are spells that allow other players to banish your demons, and until you’ve converted the relevant spell card into a demon, it is fair game for others to transmutate and to swap them into their grimoire.

The game ends as soon as the spell deck has been exhausted, meaning you can try and rush the game and finish it with the most favor points, even if you only have a couple of lesser demons. There are so many little mechanisms and nuances in the game, which makes it so interesting and tense.

As you can tell, the game is very thematic, with pools of blood, high stakes and all the different spells you can cast. The overall theme does really come through, and you feel like you’re starting out as an apprentice cultist working your way up through the ranks of your lodge until you are able to summon greater demons which will bring you victory, all the time keeping an eye on the other cultists around you who are constantly trying to hex you and interfere with your spells.

So if you like mint tin games with a good level of strategy and some luck, and especially if you like the theme, then take a closer look at The Blessed Dark. I don’t think you’ll regret it. Our games group certainly enjoyed it, and I think it’ll become a regular game night opener or finisher.