A new game is about to begin at McDonald’s next month – the Game Time Gold! While we don’t have a lot of details about it yet, the fact that one $500,000 Sweepstakes Prize is available each week for the first four weeks is already pretty interesting! So let’s have a look at other things that you might not know about this promotion running in-store and online at PlayAtMcD.com during the month of November.

1. The Game Time Gold at McDonald’s is replacing the McDonald’s Monopoly Game (For this year)

At that time of year, people were used to visit McDonald’s restaurants with the hope of collecting both Park Place and Boardwalk game pieces for a chance to win the $1,000,000 Grand Prize in the Monopoly-themed game. For some reasons (Super Bowl 50?), the most popular McDonald’s promotion won’t return in the U.S. this year. Instead, the all-new “Game Time Gold” game will hit restaurants starting on November 3. McDonald’s decided the use the same URL as the Monopoly game – PlayAtMcD.com.

2. You need a Game Piece to play

3. Ordering Hash Browns is the cheapest way to get a Game Piece

Priced at $1.28 in California, $1.31 in New York, eating hash browns will be your cheapest way to obtain game pieces. And now that you can order breakfast all day, this is your best shot a getting tons of game pieces at a low price. The 20-piece Chicken McNuggets is the priciest food item of the list at $6.40 in California and $6.55 in New York but, on the other hand, it will get you two (2) Game Pieces so as long as you love them, that’s good!

4. McDonald’s is promoting this new game with TV Commercials

McDonald’s has uploaded two 15-second ads on YouTube to promote the Game Time Gold Game. The first spot is revealing Chicago Bears’ coach Mike Ditka’s new team – Green Bay Packers – while the second one features Jerry Rice, one of the greatest wide receiver in NFL history who played with San Francisco 49ers, who is now rooting for the Cowboys. Will your NFL loyalties be tested too? Their’s only one way to find out, starting on Nov. 3!

5. You have good chances to win… Food Prizes

With four (4) $500,000 weekly giveaways, McDonald’s will be giving a total of two (2) million dollars in cash only. This doesn’t include the value of other prizes such as Super Bowl 50 trips, NFLShop.com Shopping Sprees, Xbox One consoles, food prizes, and more! Not to mention that 18,000 $50 cash prizes will also be awarded instantly during the in-store game! 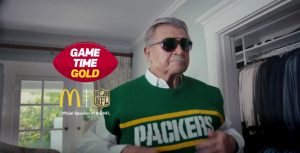 You read right, over $58,000,000 in prizes will be available to be won during the Game Time Gold at McDonald’s and that doesn’t not even include the In-Store Game Instant Win Food Prizes! Can you believe it?

Here’s a breakdown of all prizes:

How do you feel about the upcoming Game Time Gold at McDonald’s? Let us know by leaving a comment below!

Best Games Like MapleStory To Play In 2022 - Gamer Tweak