The Game Changer Homogenizer considerably speeds up the making of e-liquids. It’s a prop created by a 66-year-old mechanical engineer, who worked on it for years refining it. And the first feedback from DIY enthusiasts is spectacular. Because everyone says it’s a revolution, even the most reluctant.

What is the Game Changer Homogenizer?

It is a tube-shaped accessory which is drilled with holes. You have two small holes at the end of the tube and you have two large holes at the other end. The liquid passes through the holes and the Game Changer Homogenizer mixes it at the molecular level. Why is this a revolution? Because the homogenizer already exists, these are laboratory devices that are used precisely to mix the components of a liquid in a completely uniform and homogeneous manner.

Among the explanatory videos on the subject, we have someone who gives the example of cow’s milk. When you let cow’s milk sit for a while, the fat will separate and rise to the top. A homogenizer ensures that the components are well mixed so that there is no longer this separation.

Homogenizers on the market can cost anywhere from $ 400 to $ 3000! The Game Changer Homogenizer costs $ 200… You might think it’s expensive for a tube-shaped accessory. But on the one hand, it’s one guy who makes them and everything is handcrafted. Considering its admirable success among early adopters, one might think he is considering mass-producing it to lower the price. Right now, you have to put yourself on a waiting list and hope that you can have one.

Compatible with most rotary tools

In the future, the creator plans to create a box that will allow it to be installed on any rotary tool. You can also buy a real homogenizer and install this accessory on it. Yes, they are expensive, but you can find used models on eBay.

Clearly, the rotary tool is more interesting if you find the model in question. Even if you already have one of these models, it is advisable to buy a new model, just for the e-liquid. Your old rotary tool probably has wood or metal debris that could contaminate the e-liquid.

And you will also have to add an ultrasonic tank, but if you are used to reconstructable, then I think you already have this type of tank.

This concerns the real DIY

Here, we are not talking about the DIY that we do in France where we give you all the ready-to-use e-liquid and you just have to mix the components. The United Kingdom and the United States still have a large community of true DIY enthusiasts, which means that you combine different flavors to make your own e-liquid. In France, this practice is discouraged, because the manufacturers want to fill their pockets like pigs! 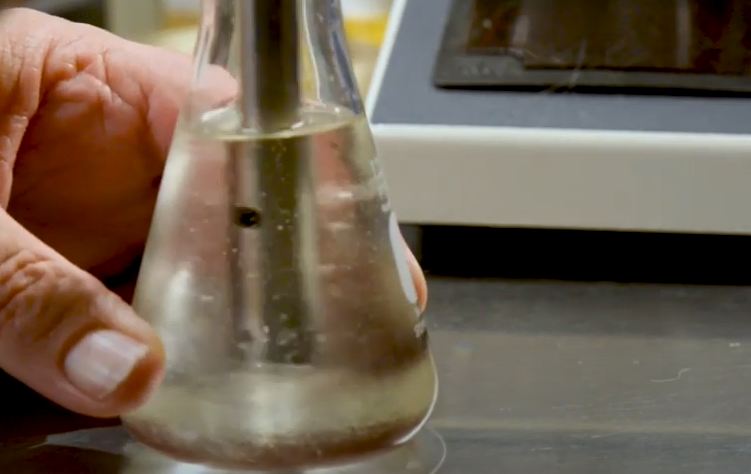 The Game Changer Homogenizer is for you if you are used to creating your own e-liquids. Let’s say you are making a custard e-liquid, which is a nightmare for maceration. You mix custard, strawberry and caramel. And then you have to macerate it for 4-6 weeks to get vapable. With the Game Changer Homogenizer, it will take you 24 hours. Once you have mixed your flavors, your PG / VG and your nicotine, you will use the Game Changer with your rotary tool to mix and homogenize the liquid. A few minutes are enough.

The end result will be milky in appearance and you should let it sit for 8-10 hours (overnight). And there you have it, your custard e-liquid is ready. And if you have an ultrasonic cleaner, you put the liquid in it, do a few turns and the liquid will be ready. This means that the ultrasonic cleaner lets you have liquid ready to use, almost instantly.

How does the Game Changer Homogenizer work?

Too good, but it works

When the Game Changer Homogenizer was presented by its creator, everyone winced. Because for years there have been attempts to speed up the maceration time. And since I know a bit about cooking and baking, I can tell you that time is an ingredient.

But this time is not inevitable with this Game Changer. Lots of DIY enthusiasts have tested it and it works brilliantly. There are a few small caveats. For example, an aroma like rich cinnamon must have struggled to pass, but this remains an exception. We have a guy who has tested several custard liquids with the GC Homogenizer and he himself can’t get over the amazing results.

If the Game Changer Homogenizer becomes mainstream and mass produced, then it could really create a revolution in vaping and liquid manufacturing. Today a liquid maker is mixing their flavors and they have to wait 2-3 weeks to find out if they’ve made a Top Seller or some big shit. With the Game Changer Homogenizer, a brand can create 5 variants of the same liquid on the same day and know the final result in 24 hours!

Do not confuse maceration and maturation (oxidation)

Many people confuse maceration with maturing e-liquid. Maceration concerns the fixing and the final mixing of the molecules that make up an aroma of an e-liquid. Maturation involves adding nicotine so that the oxidation enhances the flavors and allows for a final liquid.

Technically, the Game Changer Homogenizer is mostly about maceration, which is the result that the manufacturer wants to have at the end of their manufacturing process. But in the presentation videos, the addition of nicotine and a shot of GC Homogenizer make the liquid directly vaporable. Certainly, some maturation will be necessary, but in general, it is ready now!

I think we have not heard the last of this accessory. Because with the incessant attacks on the vaping all over the world, you should always encourage you to create everything by yourself. Knowing how to create your own liquids with flavors available on the market is one more vaccine against the corruption of Big Tobacco and Big Pharma.

I encourage you to view the two videos below on the Game Changer Homogenizer.